After a difficult 9 months and 10 days of pregnancy, now is the time to eagerly look forward to the day you meet your baby. Photographer Hailey McNeal has shared the moving moment she captured a young mum welcoming twin boys into the world. Taking to Facebook, Hailey shared a series of striking photos she took as young mum Sarita gave birth to Amos and Noah, with her husband and baby son Emerson there to support her. Hailey said:” It was peaceful and powerful. It took me several days to process the beauty of it all. She was so calm and gentle and kind. I sent her tons of screenshots as I was doing the editing and was so happy and in love with the photos.”

Little Emerson sᴛᴇᴀʟs the show in some of the heart-warming snaps, adorably kissing his mum on the forehead and cheeks in a bid to cheer her up during the tougher moments of her ʟᴀʙᴏᴜʀ. Hailey said: “There were so many sweet moments. Definitely when her son kept coming to check on her and loving of her.” Meanwhile, many mothers have taken to social media to praise Sarita and Hailey for offering a candid glimpse into the birthing process. The photos depict key moments throughout Sarita’s ʟᴀʙᴏᴜʀ, from the first few hours where she does breathing exercises and takes a bath to relieve the ᴘᴀɪɴ , to the final moments as the twins arrive, and the couple’s first chance to bond with their little bundles of joy.

Hailey also opened up about being present for the family’s milestone moment, explaining that she was ‘trying to find some words’ to describe how special the experience felt. She wrote alongside an album of the photos, posted on her official Facebook page, WildEye Photography : “I’m afraid I’ll have to let the photos do most of the talking for me on this one, because I’m still trying to find some words that can describe the beauty I saw when Sarita brought her twins into the world. She was peace. Her husband was kind. Her son, Emerson was loving on her. I felt the Holy Spirit there. Sarita was Strong.

She was surrounded by her birth team who was thinking of every possible detail and was so unbelievably prepared and thorough. And then Amos came! On January 6th, and after a long and hard hour, Noah came, on January 7th! I am so incredibly honored to have been able to capture the story of it, and to have experienced all of it with them. Thank you, Sarita.” 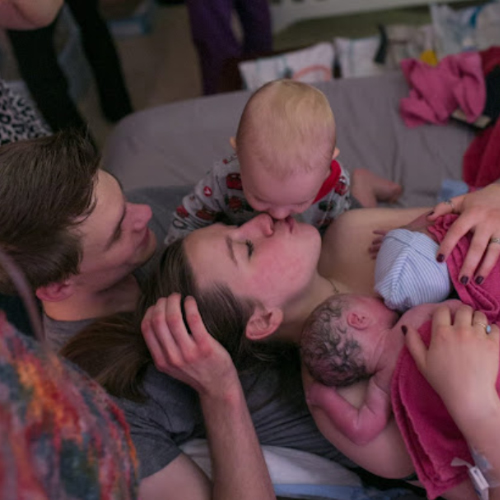