Kulan is the owner of the proud title of a representative of the mammoth fauna. According to various sources, their fossil remains are dated from 5 to 7 million years ago. In the Pleistocene era, herds of wild donkeys were common in Europe and the subarctic regions of Siberia. Now the kulan lives in the sultry steppes of Central Asia, the south of the Urals and Siberia. The animal’s dimensions are more than solid. Outwardly, the kulan looks like something between a donkey and a horse — the donkey grows up to 125 cm at the withers and weighs up to 300 kilos. The sandy-brown color of the animal’s skin and physique evoke thoughts about its relationship with the Przewalski’s wild horses. But don’t get fooled. Kulan is a pure donkey. And this irrefutably proves his character. After all, the kulan is a wildly wayward creature. The fierce stubbornness of a wild donkey is combined with horsepower — not the best combo for taming or domesticating. Physical data enable the kulan to stand up for himself and his neighbors. When attacking, a predator puts its health and teeth at stake. Both the steppe wolf — the only natural enemy of the kulan — can easily lose in the battle with the donkey. After all, donkeys are not only stubborn, but also smart. Seeing a potential threat, the males unite and rush in a herd to beat the offender. So predators get only weak and sick individuals. If the “hit” strategy works with wolves, then with humans, kulans use the “run” strategy — even the whole herd cannot be trampled against a shooting stick. Seeing a hunter, donkeys rush at a horse speed of 46 km / h. Donkeys are capable of all these activities not thanks to, but in spite of — even by the standards of vegans, their menu leaves much to be desired. The kulan feeds on coarse steppe grasses and salted vegetation. Steppe soils are saturated with salts, which affects both the flora and steppe water bodies. For other herbivores, such a diet is akin to a death sentence: eating salty food in the sun that sucks out the already scarce fluid from the body is not the best idea. But for the kulan it is normal. From May to August, kulans fight not only with wolves, but also with each other — they start rutting. At this time, the blood of males boils from the abundance of sex hormones: young daring peppers rear up, kick and bite. The boys are not shy to hit on the most painful place. No, not the one you think. 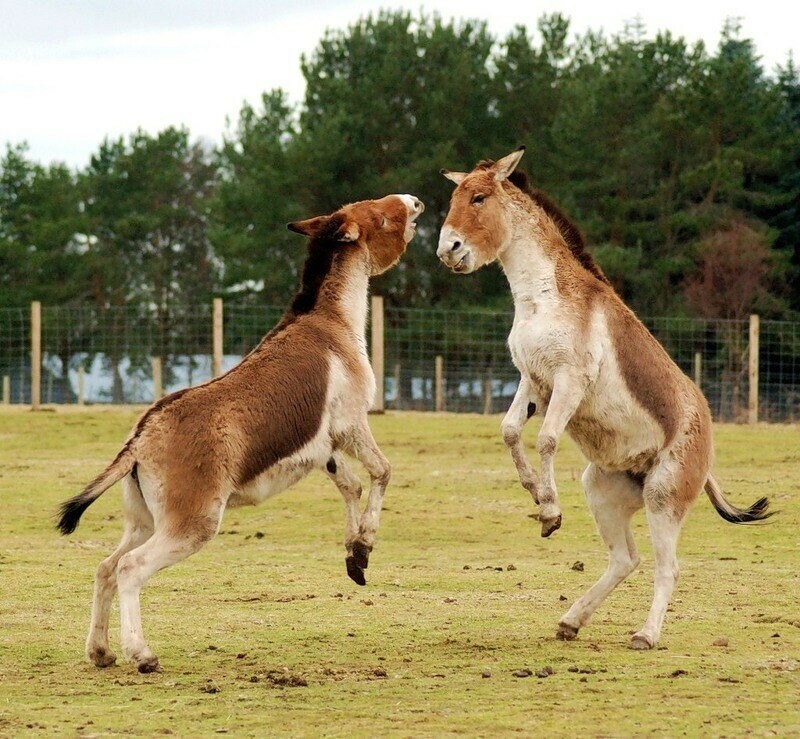 We are talking about the hocks — the part of the leg that bears the main load. But the reward is sweet — the winner is waiting for a harem of donkeys ready for romance. After mating, females go pregnant for 11 months. The male all this time will protect his beauties and repel the raids of competitors, who sometimes unite in whole gangs. If an alpha is strong and healthy enough, he can keep one herd for about 10 years. But, alas, the brutal donkey is not able to protect its relatives from extinction. The reason for the Red Book status of the kulan is poaching for skins, habitat destruction and competition from livestock. The fact that these donkeys practically do not live in reserves makes it difficult to save the kulan from complete extinction. Therefore, scientists are fighting in every possible way for the opportunity to reintroduce the kulan in its former habitats.