When a small child appears in the house, not only the life of parents, but also pets changes. And so it happened with this cat – he was not at all ready for the appearance of a new resident in the house.For half his life, a cat named Sunny lived in an animal shelter, where he waited for people who wanted to take him in. And when a family was found for him who wanted to give him care and a home, the cat was very happy and very quickly fell in love with his owners. 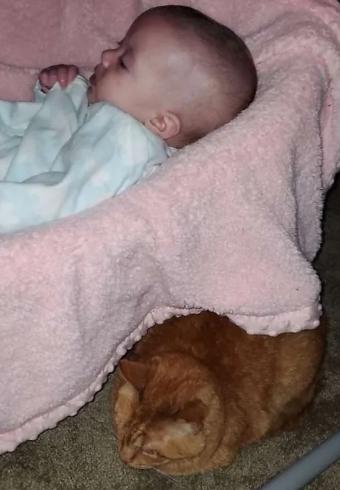 The cat began a new life – carefree and happy. He was surrounded by love and attention. But everything changed when a newborn girl, Hailey, appeared in the house. The cat immediately lost his temper. 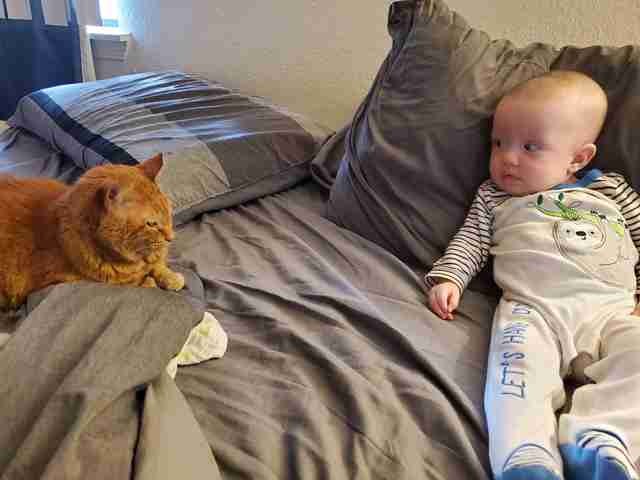 “When we showed him our daughter, he was not even particularly interested in her. We put the cradle on the floor, Sunny sniffed it and immediately went to eat,” shared Shanon.For several months, the pet showed in different ways that he did not like the child at all. The couple did not expect the cat to receive Hayley so coolly and were surprised by the cat’s indifference. However, one evening they learned the truth. 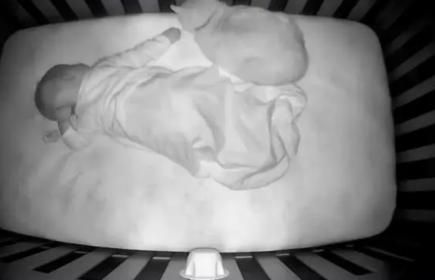 The couple saw through the monitor of the baby monitor how their pet entered the room where their daughter was sleeping, jumped into her bed, lay down with the baby next to him and fell asleep. “I did not expect this. To get into the crib, youa2w1A need to jump high, which is not so easy for Sunny, because he is already old and tries not to do it.

It turned out that all this time Sunny treated the girl with tenderness, he simply hid it. When his secret was revealed, the cat forgot about pretense and began to show in all his ways how he loves Hayley.

As soon as she started to cry, Sunny was there to console the baby. after a while, the cat stopped sleeping with the owners altogether and spent all his time with the girl. So now they are real friends!